Hi,
I wonder if anyone can furnish me with the benefit of their experience? (I hope so!).

The short version is I need to find the inertia/fuel cut off switch. It is not on the passenger side suspension dome as just about every google search result says that it should be. The car is a 206 cc (obviously) 1.6Hdi, 55 plate.

Longer version: I have had the car off the road for three months, mainly to plate up up holes on the underside of passenger/nearside of the car (which will have involved some hammering/grinding/air impacter etc) and swap the rear axle. I am now in a position where, now back in one piece, the engine will crank but not start. Battery has been disconnected during the job. In short I cannot hear the in-tank punmp priming.

In case it was an immob problem, I have re-synched the key with PP2000. No difference.

Whilst I don't believe in co-incidences, just in case the in-tank/fuel lift pump has taken the opportunity to go belly up, I've wanted to check the electrical feed to the pump, so checked the wiring diagrams. My eyes alighted on the interia switch, which before the pump in the circuit. Makes sense really - have a crunch and it stops fuel being dispatched to the likely crunched end....I've been hammering etc. Maybe it's cut out as a result, so no fuel = no starting. That fits, so find/reset the fuel cut out/inertia switch!

In case it was lurking under the secondary fuse/relay box (this has longer heavy fuses and some green relays) - between the passenger front suspension dome and bulkhead, but bolted to the rear of the side/rear of the dome (i.e. where Google says it SHOULD be), I have skinned my knuckles unbolting that. Nothing apart from an electronic gizmo box (either aircon or esp box - not sure).

Given that all I want to do is press the reset/short it temporarily i.e. to rule the switch out of the equation, it is all becoming rather tiresome!

Would anyone have any ideas on where to look?

I'd just like to keep the car on the road if I can - my youngest loves it!

Any thoughts on the matter gratefully received.....

Re: Inertia/Fuel Cut Off Switch

It does not appear in the wiring diagrams, so I assume it is not electrical. I've trawled through the Parts diagrams, and it is not identified as a replaceable item, so it must be included in something else. My guess is it's the cylindrical object shown below Part #4, and incorporated in the pipework Part #3. 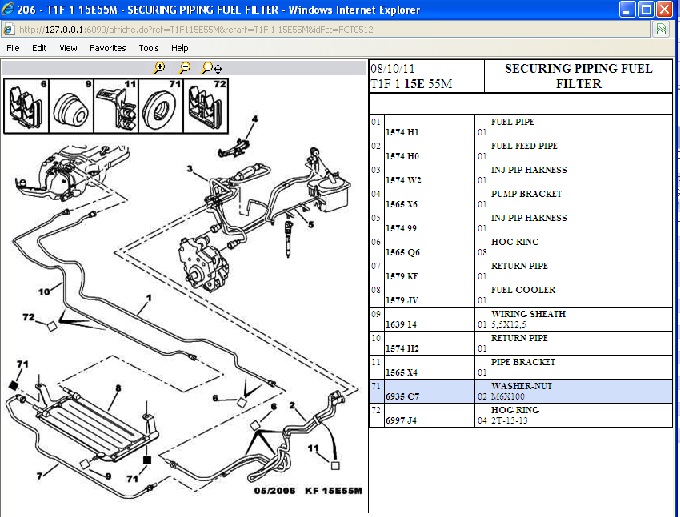